"All inclusive" by Andy Mercer 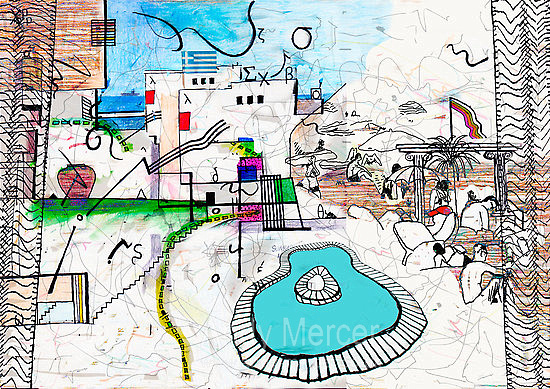 Cyprus is a lovely island and the people are very friendly but it is very hard to escape the feeling even when you fly in for a week and for the most part stay within the hotel grounds that there is a lot going on all around you.. in Syria, in Turkey, in Greece, in Israel and across the region.

Even more curious is that Cyprus seems more British than just about anywhere else in the Med, everyone speaks English… full English at breakfast with a few olives.. milk in their tea.. distinctly British looking traffic lights.. and they even drive on the right side of the road. It's a Britain in the sun.

I have to say things generally tend to happen to us when we go on holiday (vacation)
One day my wife and I were taking in the spring sun by the sea.. when I noticed unusually that there were no pleasure or cargo boats out at sea. Within a few minutes a military patrol boat came up the coast and took up position close the marina.

A few minutes later a Rihanna (type) jogged past with her security guard, who I thought was a perve following a young lady so closely but my wife put me right on that one.  Surely even Rihanna or her look alike doesn't warrant a patrol boat ?

In the distance another two ships came into view.. they looked a different shape to the cargo ships that you can regularly see on the horizon and they were moving much quicker. A few miles from shore they slowed and stopped. Then a small black dot lifted off the back of one of the ships.. flew around the ship a couple of times and then flew over us and away.
It was military.

We watched engrossed by it all.. not a single pleasure boat went down this busy tourist coast but there were now several large vessels on the horizon. One looked like an aircraft carrier.

After the departure of the helicopter nothing much happened for awhile. So we decided to head back to the hotel while keeping one eye on the sea.

Throughout the rest of the day I kept on checking the horizon but things remained pretty much the same. Three or four  ships on the horizon and the military patrol boat anchored near the marina.

As we prepared to go and eat I switched on Sky news. Kofi Annan and John McCain were in Turkey supporting the Turkish after Syrian troops had been shooting refugees inside Turkey and Lebanon just across the water. After his speech to the camera's the UN General Secretary was shown climbing onboard a military helicopter as he left.

A few minutes later we heard a helicopter in the distance, it flew out to the same ship and landed on the back.

Within a few minutes all the ships were gone or leaving. So was it the edge of international politics or is that the trouble with creatives doing nothing on holiday ? Sadly Hilary Clinton didn't turn up at our hotel for a press conference.
The war ships on the horizon.. the helicopters.. made it feel like “all inclusive” in the danger zone.
After a few days of doing nothing but bringing up the vitamin D levels, just for a change we decided to take a trip over the green line and visit a place that doesn't officially exist The Turkish Republic of Cyprus.
When the week ended we flew away to “normality”
Andy Mercer's website
Keywords: cyprus vacation, green line, package holiday, syrian crisis, turkish republic of cyprus