Twenty years ago I had to travel to London to see Chagall’s work exhibited now he has moved nearer and come to Liverpool. In another twenty years maybe he'll be showing next door ?

Having spent most of my life in the 20th century, 21st century orientated folks will have to excuse my going on about Chagall. For reasons I barely understand I never tire of his work. It's hard to say anything new, for me it's like visiting an old friend..

"When Matisse dies Chagall will be the only artist who knows what colour is."

He was "dead" right. I always feel the need to get in close to Chagall's work... and get my head round the logic of the illogical. From a distance things looks like a church, a person, a house, but up close they often make little sense visually. The eye is led a merry dance. Why should a guy who mainly painted Russian Jewish peasant life have such a hold on my/our imagination ? Not many Jewish Russian peasants at the show.

Some folks have a song or music as the anthem to their lives, but for us this role is probably played by Chagall. The artist with his love flying above his head while holding her hand was made for us, but in reverse. Chagall doesn't care if the line is scratched, the forms don't make sense and the colour isn't flat and neither do I, so maybe that's a part if it. It seems an insult to analyse his work by any conventional artistic standard.

Chagall is to Russia what Warhol is to the USA. At first it’s like looking at the pieces of a unmade jigsaw but magically over time the whole thing comes together. The sum is greater than the individual parts. Don't look too long, Chagall gets under your skin. Months later you will see a pic and know instantly he painted it. Go and have a look !

He doesn't preach, he isn't overtly political, arrogant or sentimental.  His works goes against the current prevailing tyranny of photographic realism that cries out from all directions from every advertising hoarding and TV commercial. Chagall just is. I would happily hang a Chagall pic on my wall.

Which brings me on nicely to.. I'm not sure what the rest of Liverpool Tate is about. On the ground floor there was something about “Hangmen” I looked into for 30 seconds. I didn't see any Hangmen but maybe I didn't look hard enough.

How have visual art venues been hijacked by this stuff ? I'm all for experiments but I’ve been seeing similar obscure visual experiments in the majority of galleries for 40-50 yrs now. In what way is this still breaking boundaries or experimental ?

I suspect Duchamp understood he was on a road to nowhere and decided to do other things.

How did this “Cult of Obscurism” take over almost every gallery ? And why not theatres, cinema's, science labs or music venues ? Did Karl Heinz Stockhausen take over the Royal Albert Hall to the almost complete exclusion of all other forms of music? Did Beckett and his followers take over all the West End theatres ? No.. so why has this stuff taken over so many galleries ? IMO it's plain weird.

I get the impression if grant funding was withdrawn (austerity could have an upside) the whole lot would vanish overnight. It feels like the Soviet Union of Art, appearing big and all encompassing but hiding its bankruptcy, then without warning “pop” it’s all gone. A very nice lady first brought me here when it opened, (apart from Mark Dion's ship disappearing down the gallery plug hole).. I hated the whole thing and remember being quite vocal about it. I think she was shocked. But for me art will be always have to incorporate colour and line.. I really don't understand anything else. I’m unashamedly partisan. I really don't care if some guy sticks old plates on a wall and calls it art.. I'm not interested.

I like the gaudy plastic chandelier in the foyer though.. it doesn't take itself that seriously.

Anyway still enjoyed the exhibition. Great to see Liverpool on a lovely sunny day bursting with international visitors and looking every inch the major European city it deserves to be. But that is a whole different story. 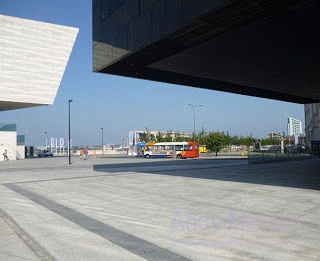